So what's with all the cars and trucks?

It's a Dad thing! My Father was the head mechanic for a transportation/ construction company. Every time he saw an old car, it reminded him of an event. He would smile and shake his head and launch into an exhaustive retelling, right down to how many times he had to turn the bolts. From the time he had to repair a truck on the Mystic River Bridge before it was attached at both ends to the $300 he earned making two passes with a snowplow, cars were unfailingly interesting in my family.

Dad and I logged many hours in the car together. I used to ride to our cottage with my Dad's narrative for entertainment. He renamed all the road like "Old Snakeback". Our cars had names as well. He told me that if I didn't name the car, "How could I talk to it?!" "Nellybell was the first name I remember.

On our way to NH one spring we stopped in Haverhill to watch huge earthmovers do site work for a new plant. Ice cream at Wasmaco's and clams at Merle's were standard stops.

Our cars were never new, rather elderly models kept functioning by Dad. One of the first cars I remember had a city horn and a country horn. A most impressive feature. Our cars were from before directional signals were invented - back when you had to stick your arm out the window to signal your intentions.

A broken teenage romance inspired Dad to start my driving lessons at 14. He just couldn't stand any more boo hooing around the house. We went up to the Harold Parker Forest and he pulled over to the side of the road. After I got behind the wheel, he drew the stick shifting pattern in the dust on the dashboard. All the hopping and chugging soon had us both laughing 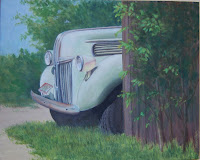 . It was not all smooth sailing until Dad brought home a 1949 clunker. Since we lived on an "unaccepted" street - the term for our dirt road, Dad felt it was okay for me to drive the clunker around the neighborhood. The boy next door used to ride with me while I helped him with his homework. That must have been the beginning of talking through every crisis from behind the wheel. My shifting improved remarkably. Mud was another matter. A classmate of mine who lived further down our road was waiting for her boyfriend to pick her up. I got stuck where her driveway turned off. She was not happy to pick her way through the mud to meet her date.

In time I was legally able to get my license. Since my Mother did not drive, Dad said I didn't have to pay for anything as long as I took my Mother wherever she wanted to go. We went to a lot of ice cream stands! Each summer I would load the boat with all our summer belongings, hitch it behind the car, and drive to the cottage. Dad taught me how to back up the boat trailer. Backing up a trailer has actually become somewhat of a spectator sport around here as we live across the street from a boat launch ramp. Some folks are more successful than others, me included!

In the fall of 1989, we lost Dad. It was hard for all of us. In an effort to stay busy, I took a painting class. A beat up old car sitting in the weeds became my first sale. Later I received a commission to paint a house with the owners Porsche in the driveway. It was more fun to do the car than the house. I had found my niche.

Posted by Marilyn at 9:47 AM No comments: 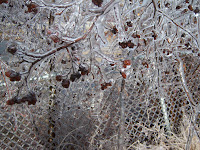 We have been experiencing some roadblocks lately. An ice storm has disconnected most everyone in the state. Who knew what life would be like without electricity or water for a week? Not to mention the darkness starting at 4pm. Life revolved around the wood stove, flash lights and flickering candles. Don't let anyone tell you that candle light is flattering - at least not when you've been "showerless" for several days!
My mother used to say it was important "to improve the shining hours". So I used every minute of daylight, not devoted to lugging wood, to read a 723 page book. I could have been painting.
The lack of electricity has given me a new appreciation for those early artists. They accomplished so much with very little. Suddenly I wasn't running a wash, cooking or vacuuming, so why didn't I paint? Because I couldn't charge up my Ipod? It was a challenge to understand how to use the time. I could have used the natural light to paint.
We are currently in the midst of another storm - lots of snow this time. The electricity is still on but we are better prepared if we lose it this time. Tomorrow I WILL paint.
Posted by Marilyn at 6:39 PM No comments:

From the beginning, painting and the decorative arts have always fascinated me. I was the kid who cut out magazine illustrations, pasted them inside a box and then lay on the floor with my head inside the box. All the better to imagine myself inside the pictures. I glued decorative elements all over the mahogany woodwork of my childhood bedroom. What my mother thought was Cheerios in my closet turned out to be worms from a failed terrarium project. From building boat parade entries to painting five foot daisies on the hall wall, I was always creatively busy. During my children's early years, I made posters for every conceivable local event.

In 1974, a horse was responsible for the beginning of my "formal" art career. Due to an unpaid hay bill, I was looking for a job. I was hired at the Rochester Fair to work in the Art Department as a "boy". They usually hired boys to climb ladders and it was agreed that I would be acceptable. It was like Christmas. Between 400 and 500 paintings came in, to be hung, judged and displayed. Suddenly I was on the inside listening to the jurors critiques, learning what was good, what to avoid.

In 1989 I finally started painting. After years of assuming I couldn't paint, suddenly I was competing at the fairs and winning recognition. I took an art course at Hillsborough Community College in Tampa, FL and followed that with a class with Kathi Hobbs of Lutz, FL. In 1991 my husband and I moved into our recreational vehicle and traveled the United States. For four years I further developed my skills at workshops in Santa Fe, NM and Scottsdale, AZ.

I am a juried member of the NH Art Association, Art Superintendent of the Rochester Fair and member of the Manchester Artist Association. My web site is: marilynsbrushwithart.com. My specialties are: residential and automotive portraits.
Posted by Marilyn at 5:05 PM 1 comment:

THE blog for all who start with with a flourish yet struggle with road blocks along the way. This site is looking for enthusiastic encouragement of oneself and others.

Maintaining an artistic vision can be heavy lifting. Case in point: I was painting my dining room with a luscious shade of "fresh raspberry" paint. Granted it was originally bottle green with a white ceiling and gold drapes. Those first few strokes of fresh raspberry on a white ceiling were breath taking! The former owner stepped in just in time to gasp, "What are you doing?" I replied that "No comments were acceptable until I was finished". But was I scared! So okay, it was the crazy 1970's, but it turned out beautifully. At the time I threatened to get a tee shirt printed with "no comments until I'm done". It's taken me all these years to find a platform for this thought.

We need to give each other room to succeed or fail. Some of my best efforts have originally been failures. Everything doesn't have to be results oriented.

So let's encourage each other. What are you currently working on that only have the vision for?
Posted by Marilyn at 1:25 PM 1 comment: